Trying my hand at Indian

So awhile ago, I reported that I was afraid of trying Indian. Well, I still haven't tried it, but I'm attempting to make it.

I know, I know, I make no sense. Surely my first Indian experience would be better if I tasted food made by someone who actually KNEW what they were doing. But I'm in an adventurous experiment mood, so I'm going to go for it.

Tonight's menu will consist of: Roasted Brussels Sprouts...... not really "Indian" but we all know I'm an addict.... and Pan-seared Tofu and Chick Peas in a canned Tikka Malasa sauce.

I'll let you know how it tastes. Perhaps my attempt at Indian will be a bridge into actually trying the real stuff.

I seared the tofu so it had a little crust on it, added the chick peas so that they came to temperature, and then added some tikka masala sauce. Obviously not the most complicated dish, but definitely a nice bridge into Indian food! 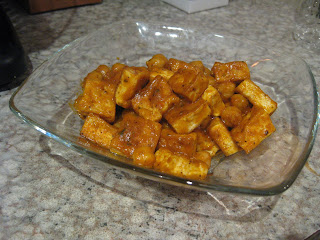 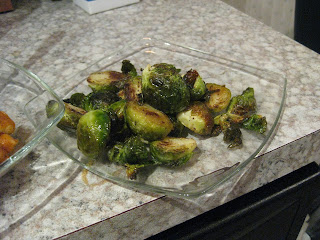