The Art of Homemade

This article appeared in the print edition of The Wall Street Journal on 6.19.13. I thought it was a very interested article, so I am reposting. I welcome any thoughts or critiques to spark a discussion.

The Art of Almost Homemade

Companies Target Time-Crunched Home Cooks; Why Wednesday is the Worst

This moment may sound familiar: It's 4 p.m. on Wednesday, and you realize the dinner you had been planning to make isn't going to work out.
It's one of the most stressful points of weekday life, according to consumer research. Now in response, packaged-food companies and grocery stores are developing meals that aim to strike a delicate balance. They are quick and simple to prepare, but still feel like cooking a homemade meal.
The target market is a lucrative one. Companies say these are homes where women—and increasingly men—like to cook when time allows, and they generally spend more on groceries. They often feel guilty relying on frozen foods or boxed meals, but a busy day can back them into a prepared-food corner.
To pull off this tricky task, companies are working to identify subtle cues that signal cooking, even in convenience foods. In many cases, scientists at major food companies have found ways to make quick meals that involve only one step. But to these consumers, that ease translates as culinary cheating.
Kraft Foods Group Inc. KRFT -2.33% spent about 18 months developing its new Recipe Makers product. During tests, researchers showed moms versions with one or two sauces. The women liked the two-sauce option better because more steps felt closer to homemade, says Risa Schwartz, associate director of consumer insights and strategy for Kraft. Other research showed these women wanted to spend at least 15 to 30 minutes peeling, chopping or doing other meal preparation "to have it count," Ms. Schwartz says.
View Graphics 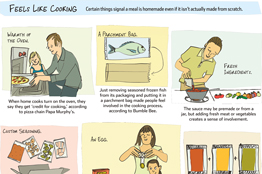 Wacso
Recipe Makers, rolling out on grocery shelves now, comes in nine flavors such as Asian Fish Tacos and includes at least two sauces that are mixed with fresh ingredients like meat, pasta and vegetables. The Verde Chicken Enchilada version has one bottle of creamy ranchero "filling sauce" to mix with shredded chicken before wrapping it in tortillas. A packet of tomatillo "finishing sauce" is poured over the tortillas before topping with cheese and baking in the oven. Kraft created recipes for the oven, slow cooker and skillet. "The microwave doesn't feel good to this consumer," to cook a whole meal, says Ms. Schwartz.
Bumble Bee Foods talked to more than 25,000 consumers before rolling out its Bumble Bee SuperFresh frozen seafood last month, including a parchment paper pouch for steam-cooking the fish in the oven. Consumers said they fear overcooking fish and don't like the odor. "At first we wondered, does it need to come already wrapped in parchment" to cut down on work, says Suzanne Stites, senior vice president and general manager of Bumble Bee Frozen. Instead the additional step—taking fish out of a vacuum-sealed bag and putting it in parchment—helped cooks "feel involved," she says.
For Holly MacMillan of Athens, Ga., the weekday dinner crush often kicks off with a dreaded phone call at work from her husband at around 4:45 p.m. "Have you had a moment of inspiration about dinner?" she says he asks.
"It's awful," says Ms. MacMillan, 41, vice president of marketing for a money management firm and the mother of three children ages 7, 5 and 1. "I'm like, 'I'm in the middle of a meeting, no,' " she says. Planning dinner is the most stressful part of the day, she adds.
Enlarge Image 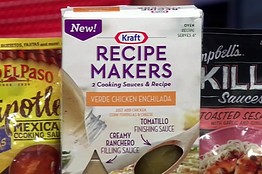 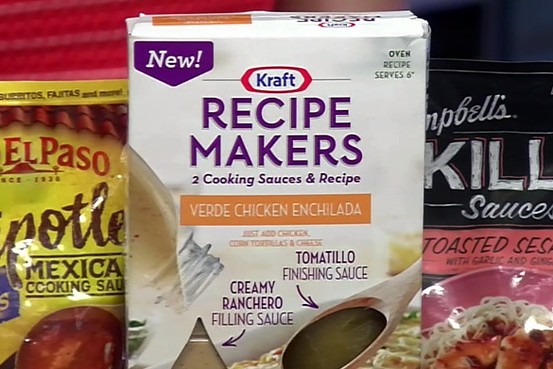 Kraft Foods Group's new line has two sauces. Testing showed people feel using two sauces feels more like real cooking.
On weekends, Ms. MacMillan serves dishes such as scallops breaded in panko and wrapped in bacon. On Sundays, she sometimes cooks ground beef for pasta sauce and tacos during the week. But by Wednesday, meal planning often "goes sideways," she says. Out comes the microwavable Bob Evans Macaroni and Cheese and frozen peas, a meal that takes minutes to prepare and that her kids love.
"My mom was a stay-at-home mom and cooked everything from scratch, so in my mind I should be doing it," Ms. MacMillan says.
Midweek is the cooking-from-scratch low point for most households. Last yearConAgra Foods Inc. CAG -2.58% bought Bertolli and P.F Chang's brand frozen skillet meals from Unilever PLC. ULVR.LN +0.60% "The most popular day of the week to use these brands is Wednesday" because you pour the complete meal into a pan and heat, says Jen Wulf, consumer insights manager for the brands at ConAgra. Still, because consumers warm them in a skillet, "they feel a little bit more engaged" than heating a frozen meal in the microwave, she says.
Weeknight dinner is "a bit like Groundhog Day. You solve for it and then you think about it again the next day. That amplifies the stress," says Darren Serrao, vice president and general manager of innovation and business development for Campbell Soup Co. CPB -2.16%
Recently Campbell introduced Slow Cooker Sauces and Skillet Sauces. The products, such as Toasted Sesame with Garlic and Ginger, flavor meat as it cooks in a pan or slow cooker. The sauces aim to please home cooks who avoid 100% prepared meals and want to feel involved in the cooking process, Mr. Serrao says.
Campbell's dubs about 25% of consumers "constrained wishful eaters," says Charles Vila, vice president of customer and consumer insights for Campbell. "These are the folks that have incredible time pressures, but they are trying to get a good, tasty, convenient meal on the table," he says. For many, cooking can mean as little as turning on the oven or pouring a can of soup over rice, he says.
Papa Murphy's is a 1,360-location pizza chain where customers add ingredients to an uncooked pizza on site and then cook it in their own oven. It shuns pizza boxes, instead wrapping the pizzas in cellophane in a subtle bid to make it more like a meal. "If you pull something from the refrigerator it wouldn't be in a box," says Ken Calwell, chief executive of Papa Murphy's International. When consumers "actually turn on and preheat the oven, there is something that reminds them of their grandma or mom," he says.
Katherine Wintsch, founder of The Mom Complex, a consulting firm that studies moms, has found mothers like meals that are about 75% already prepared. The firm asks moms to download a cellphone app, then input "high passion or pain points" throughout the day. Dinner planning is "the highest intensity pain point" during the week, says Ms. Wintsch. "Usually around 4 p.m."
Because weekend cooking behavior is so unlike weekdays, General Mills Inc.,GIS -1.46% makers of brands from Hamburger Helper to Green Giant, doesn't tend to study it, says Judy Bowman, global consumer insights director for General Mills. "We focus on Monday through Thursday dinners."
For most consumers, a convenient weekday meal means cooking with about three ingredients for around 20 minutes, Ms. Bowman says. Later this summer General Mills plans to introduce Old El Paso Mexican Cooking Sauce in three flavors intended to be combined with fresh ingredients to please "semi-experienced" cooks who need an easy weeknight dinner, she says. "The sauce is the tough part for people. They don't know what to put in, they don't know what to make and it's really hard to get the flavoring just right."
Still, some "people want to put their own touch on things," and control flavor, especially experienced cooks, says Jason Lepes, kitchen category merchant for FreshDirect, a New York City-based grocery-delivery business. He says their meal kits, including chopped meat, vegetables, and a cooking sauce, are "for someone who is OK with us taking the creativity out of it," like a busy parent.
Posted by sgoldman328 at 11:32 PM