Scream for your Calorie Burn!

Happy Halloween, fellow foodies! I'm not going to tell you to stay away from candy and treats, but if you are trying to lose weight, indulge in a smart way.

If you're looking for a different sort of burn this 'Fright Night', try a scary movie --a new study has shown that watching scary movies and horror films burns calories!

According to the study, you burn around 200 calories, just by watching a scary movie -- unless you're already desensitized to the gore and adrenaline rush.

A 90-minute horror movie can burn 113, which is about equivalent to the calorie burn that a 150 pound person would experience walking at a leisurely pace for 35 minutes.

The study found that the scarier the movie, the more calories were burned.  Top three calorie-burning horror flicks were as follows:

"Each of the ten films tested set pulses racing, sparking an increase in the heart rate of the case studies. As the pulse quickens and blood pumps around the body faster, the body experiences a surge in adrenaline. It is this release of fast acting adrenaline, produced during short bursts of intense stress (or in this case, brought on by fear), which is known to lower the appetite, increase the Basal Metabolic Rate and ultimately burn a higher level of calories"

Posted by sgoldman328 at 6:22 PM No comments: Links to this post

We made this recipe parve on Rosh Hashanah by using soy sour cream and soy cheese. It was great parve, and I tend to think it was taste incredible with the regular varieties as well.

Fittest Man of All Time

Here's a completed list of the top 50 picks. Do we agree, folks? Disagree?

The social news site has been ablaze with one user's response to the question: "What's your secret that could literally ruin your life if it came out?"

Take a look at the net's most popular response: 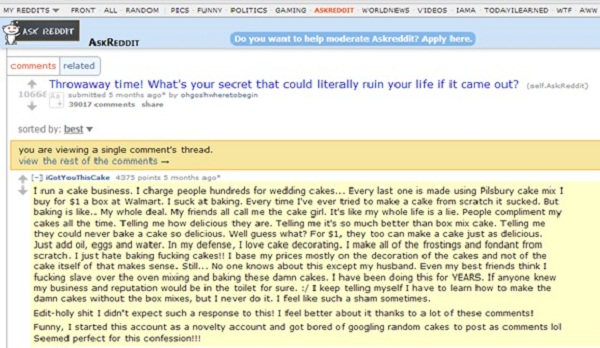 I had to laugh -- because I do a similar fake!

My signature dish is one I learned from my father -- a cheesey rice and vegetable dish, made by adding ingredients from a box of Near East rice pilaf.

However, I REGULARLY pass it off as a risotto!

What are your dirty kitchen secrets? I'd love to hear!!
Posted by sgoldman328 at 11:26 PM 2 comments: Links to this post

Sorry for my absence. Here is the recipe one reader, Valerie, requested from my "Scenes from our Rosh Hashana Table" Post. Please note that my family does not cook with a lot of salt, so please adjust to your own taste preferences. We also made quite a quantity of meat and vegetables, so the meat was stewed in our tagines, and the vegetables were cooked in the same spices, but in the crock pot. Before serving, we combined them.

Posted by sgoldman328 at 9:06 PM No comments: Links to this post